I received my second BCS a week ago, because my 1st BCS in bolted to my brewstation (photo below), and have been using it to monitor the temperature inside the carboy of my latest brew which is stored in my basement. I have a thermowell and temp sensor from Brewers Hardware. It's been an interesting last few days monitoring the temps... I was wondering if in a future version of the BCS if the data logging function could store the data on a network drive, or maybe a memory card that could plug into the BCS. Also if it would be possible to have the data file log in a different format (data being logged downward rows instead of left to right). In addition if the temperatures that are logged have a decimal point.

Carboy with the thermowell, sensor and airlock. 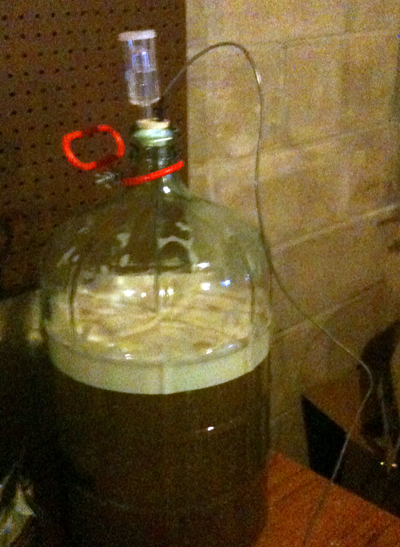 Brewstation and control panel bolted to side. 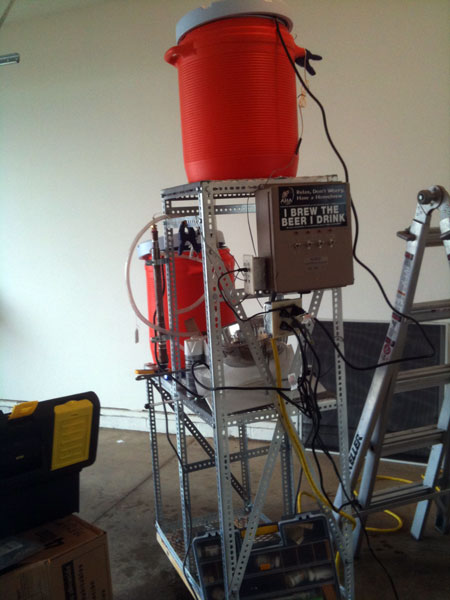 Inside the control panel 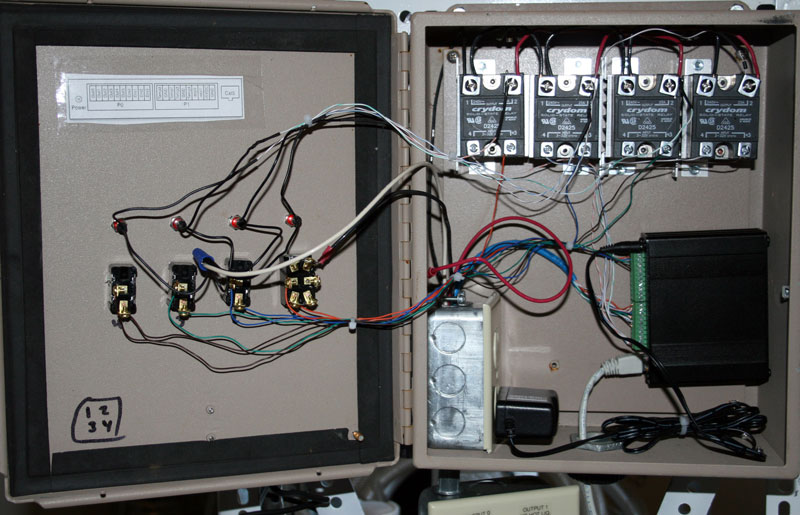 All good ideas. I agree, its kind of a pain to have the data in columns instead of rows. Unfortunately that's the way that the Open Flash Chart guys specified it, which is what the BCS uses to graph data. Its possible that one could rewrite the interface since it's open source software.

Storing data on the network is also a great idea. There are some roadblocks (or at least difficulties) with the BCS writing a file directly onto another computer on the network. It would, however, be very easy to write a small utility to poll the BCS and dump out a file (in any format). Or a small server script that would listen to the BCS for updates. I'm still looking for volunteers to help write a few BCS utilities, please PM/email me if interested.
Top

Thanks. Your post has given me some ideas. If I can figure out a way to get something working I will share that with you.

Thanks again for all of your work on the BCS, and after seeing your latest post on things to come it sounds like you are getting ready to open up the flood gates of more functionality.

Here is a cool app that has resulted from users in this forum and a keen programmer from my local homebrew club. It stores the temperature data at whatever interval you specify at whatever location you choose.

File is attached and also it may be updated as we go. Mike is an awesome programmer. Here is the link to his download site: http://michael-arthur.com/BCSTempLogger.zip

Is this for the 3.x firmware? Would he be interested in updating it for 4.0?
Top

Sure thing! Could you point me towards the change log or perhaps an example response?
Top

Check out the links in the 2nd post of this thread:
http://forum.embeddedcc.com/viewtopic.php?f=11&t=2666

The API is documented and there are sample apps available.
Top

Yes, what Jon said. I can help with any questions too, send me a PM on the forum here.
Top

I don't think we (SpokaneBrewer) are on 4.0 yet. I don't actually have a BCS (maybe i should fix that

so I won't be able to test anything until he upgrades - in the time being could someone post a sample response to get /temp ? I'll probably just consume that in the hopes of showing all probes for now
Top

Here's /api/temp/0 in case you're curious: