(An updated version 0.5.0 has been released and can be downloaded and discussed here: http://forum.embeddedcc.com/viewtopic.php?f=13&t=2755 )

Some of you may recall that I previously showed a desktop app I was using that gave me a better "heads up" display of all my processes as well as a visual representation of inputs/outputs & temps. I previously shelved that project when the new BCS 4.0 release took on most of the visual aspects of my program.

Well, fast forward to a couple weeks ago where I decided I wanted to continue development of that app. I've now changed the backend API to use all the 4.0 JSON calls and am now offering it up here for anyone that wants to use it. I've also created a roadmap for new functionality that I plan on adding. To that end, I'm releasing the app here for anyone to freely use and give feedback as to needed features.

Know that this is pretty much limited to the same functionality that I had in the old program a couple years ago. However, this is just the beginning and I've already started working on some new features that will include:
' Update buttons with enhanced graphics/display capabilities.
' Add enhanced graphics to show liquid flows
' Allow all objects to have separate forecolor, backcolor, visible & image settings based on active/inactive states.
' Add object scaling to match when user changes display scaling
' Add object scaling to group/panels to scale all child objects accordingly
' Add quick temp and duty cycle adjustments to main screen.
' In place editing of BCS data w/ write-back of config info to the BCS.
' Add configuration backup/restore
' Add data logging, filtering and display
' Add menu variable mapping capability
' Add e-mail sending via definable trigger rules
' Add multi-BCS capabilities including triggering rules across BCS's.
' Add "BCS Finder" functionality when adding a controller
' Port to Windows 10 IoT or embedded devices (Rpi2).

The files can be downloaded from here: http://www.surfcitybrewing.com/download ... -0.4.0.zip

Please note that this does require that you are on the latest BCS 4.0 Beta firmware. 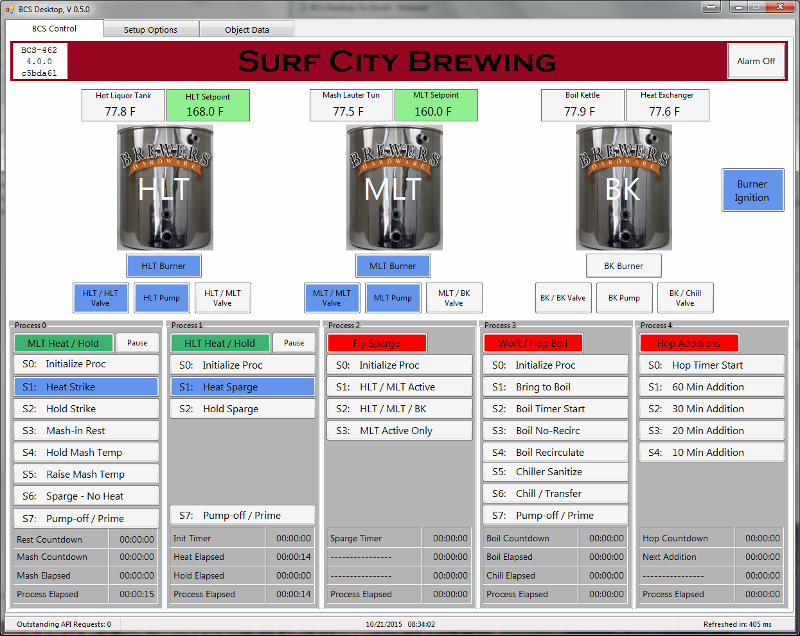 Here are some basic steps to getting the program running:
- Download ZIP file and place in a folder of your choice.
- Execute BCS-Desktop.exe
- Go to the "Setup options" tab and input the IP address of your BCS.
- If you are using authentication, input the username and password assigned to your BCS.
- The app should automatically connect and start polling data.
- Click on the option titled "Refresh BCS Labels" and let the app poll all the config data from your BCS.
- You will know it is completed when the listbox control on the screen empties its outstanding requests.
- Close the app, then restart to load with all your object names.
- You can now see and control your objects on the main "BCS Control" tab.
- To start modifying your layout, click on the option "Enable Customization" on the setup tab.
- You can now move, resize and hide options on the main screen.
- Close the customization box when finished and you will be prompted if you want to save your changes.


Post any questions or suggestions on the use of the program here - please do not PM me with specific issues.
Top

Sweet! Now I have an excuse to update my BCS to v4.0 too.

I'll have to download and play around. Will my old config transfer to this version?
Top

mavantix wrote:Sweet! Now I have an excuse to update my BCS to v4.0 too.

I'll have to download and play around. Will my old config transfer to this version?

Yes, you can convert 3.x configs to 4.x using the utilities listed in the 4.0 beta section.
Top

Wowser! I will give it a go.

All buttons and images on that sample screen are customizable. You can put in a new image or hide one of the ones there. Every button or process can be customized to be YOUR layout and setup.

The default layout is just all the inputs, outputs, etc. all in a block form and you need to move them where you want them. Alternatively, you can use my XML layout file that is also included as a starting point.
Top

Looks great! I come from 20+ years of industrial PLC programming. I am very new to the BCS world and am just delving into other programming languages such as Java, etc. I currently have a 460 running my HLT and see the potential for so much more. Will your app run on a iMac? Does it need my BCS (ver 3.7.1) to be updated to 4.0?

Al_A wrote:Looks great! I come from 20+ years of industrial PLC programming. I am very new to the BCS world and am just delving into other programming languages such as Java, etc. I currently have a 460 running my HLT and see the potential for so much more. Will your app run on a iMac? Does it need my BCS (ver 3.7.1) to be updated to 4.0?

Yes, it does require the BCS to be on the beta 4.0 version. It also requires Windows as it is a .NET app. You can try running it on the Mac with Wine, but that is untested. Otherwise you'll need Parallels or Boot Camp.
Top

This is another game changer! Loving the customization this allows!! A HUGE Thanks Jon---
I guess I'm due for a new touch screen now...

One word of warning to others and a possible bug report or it may just be on my side (using windows 10) but when I select the '?' next to the XML Layout File: text box and then hit Cancel without selecting a file or adding a name --essentially leaving the file name blank -- I get an error message that the file can not be found. Sometimes it closes the app and then when trying to reopen it spits the same message "Can't locate file. Ensure that it's located in the same folder as the program". The only way I've been able to get it back up is to delete the folder and reinstall from the .zip.

Other than that I'm psyched to get this thing going and into my system.
Thanks again Jon- This pushes the BCS to another level in my mind.
Top

Thanks for the comments!

While a touch screen is not required at all, it surely does make use much nicer. As I mentioned earlier, I hope to have this running on a Raspberry Pi2 with Windows IoT also. That would make a cheap environment for running a dedicated touchscreen.

Yeah, I should add a bit of error checking to the XML file open dialog. You can also force it to use an XML file by passing the file name on the command line. e.g. "bcs-desktop.exe mycustomlayout.xml" . The command line option also allows you to have multiple layouts that you can switch between or even have a specialized one that just shows fermentation equipment or something similar.
Top
Locked
37 posts