I got the panel 99% complete, so did a wet run with water, which went pretty good, well, other than other than blowing several SSR's on a faulty but tested good RIMs element.. 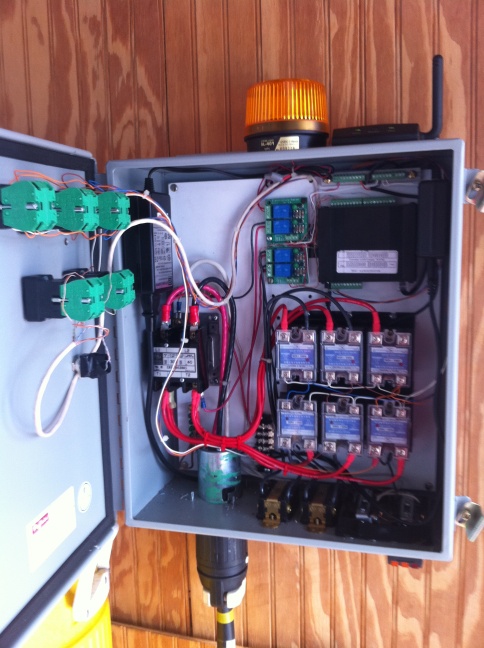 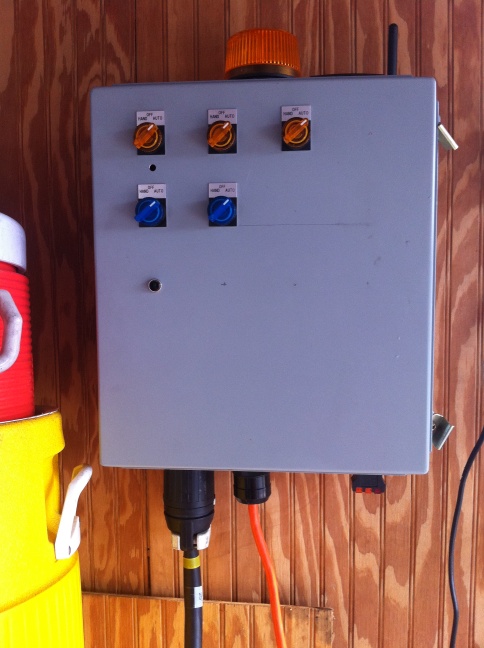 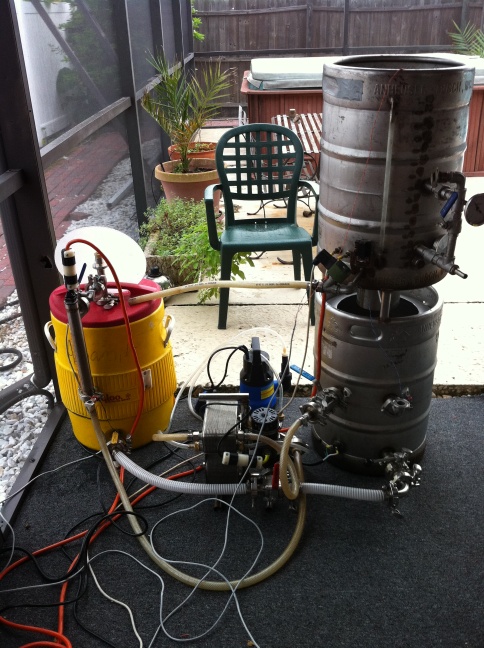 Notes -
I forgot to calibrate probes because I procrastinated on hooking them up due to indecisions on wire and connectors... said it was 170, was really 160, added 30 minutes to brew day rounding up specs and coefficients and programming the BCS..

overshot HLT temp quite a bit, researched and lowered Integral from .5 to .2 on HLT PID.. added another 15 minutes

solenoid valve on HLT acting as pump1 with gravity feed stuck open, holding hose up while trying to fix took another 15 minutes, (later found a small sliver of wood in it WTF????)

mashed in, need to have mill add the grain directly to the mash while adding water... lautered by gravity to ensure pump did not get too much grain... pump still sucked in some, and was also collapsing hose and sucking in air, shaking mash tun only succeeded in dislodging the false-bottom fitting and pump sucking in pure grain... transfer mash to another cooler, spend 30 minutes clearing grain and fixing FB, looks like the pickup was sucking to cooler bottom... ground some reliefs in pickup tube and re-inserted... I think I am done with cooler, making a sankey MLT... put mash back in MLT, lautered a bit and start pump, seems to work... no idea what my mash temp was, but down to 140 or so so play with RIMS very carefully by using HOA switch to only turn on when I can visibly see flow, do not want to have circulation stop and mash to scorch... temp overshooting in RIMS, set that PID Integral setting to .2 via browser on phone (computer inside house).. not overshooting that much, but not steady either, need better probe placements for Mash and RIMS..

after that started circulating properly, a monsoon with lots of lightning hit, wind blowing just the right way to send water through the screen and onto entire brew system, march pump,exposed 240V element connections and everything else... nothing bad happened, monsoon blew by, started lautering to BK.. by now, at least a 90 minute mash (funny, that is recipe called for

lauter and sparge went without a hitch, collected 7 gallons of decent wort, would have liked clearer, but given the circumstances, I was happy...

Got to boil quicker than I thought it would, added hops and started to clean other things BCS pretty much not doing anything by now, using my manual 555-timer PWM knobs for boil strength, probably 75% was nice boil, cranked all the way before sending through chillers to sanitize them.. not sure if I will use the BCS to do this in the future... seems like almost more work to adjust it in BCS...

flame out.. spark out? juice-out? Amp-Out?? turned on garden hose to first chiller, loaded bucket with sump pump and ice for 2nd chiller, went inside and transferred pumpkin beer that was in the carboy I wanted to use to a corny and cleaned and sanitized carboy(fits in my little ARB Freezer/Fridge cooler).. came out and beer was about 100 or less, added water to ice sump, turned it on, turned garden hose down to a trickle... probably over-chilled, think it got to 62 degrees, still had ice left, forgot this was 5, not 10 gal...


To do list:
Real E-Stop
circuit breakers on SSR's
Better thermistor probe placements
new mash tun that doesn't leak air, suck to the bottom, and allows for easier vorlaufing and pump priming
convert HLT from gravity valve to pump for more even temp...

decide if I want BCS controlling boil hand, PWM control on the Hand position of my HOA seems pretty good... (might be other solutions here, like maybe a feature to use two DIN's to raise and lower boil % ??) or a separate external module that can raise setpoint(mash) or duty-cycle(boil)
Top

Re: First brewday with BCS

Here are pics of the PWM knobs for HLT, BK, and RIMS.. 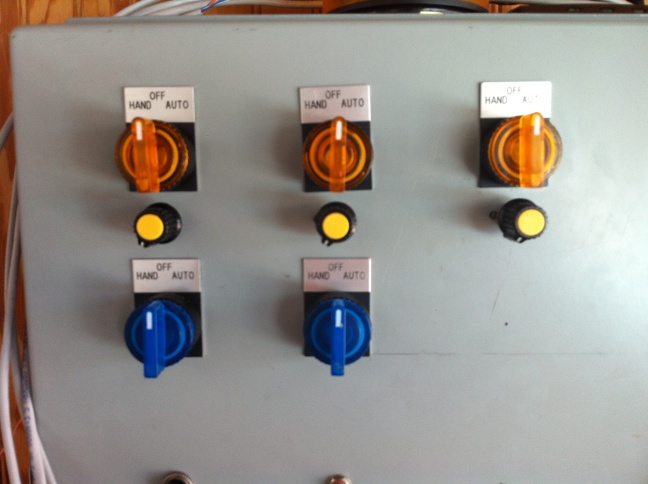 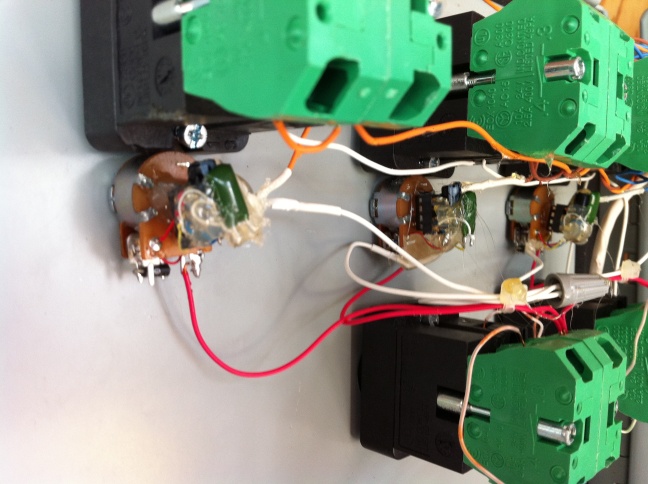 
and the hefe chillaxin at 66 degrees... going to do another batch at 70 next week and compare clovey and bananaey 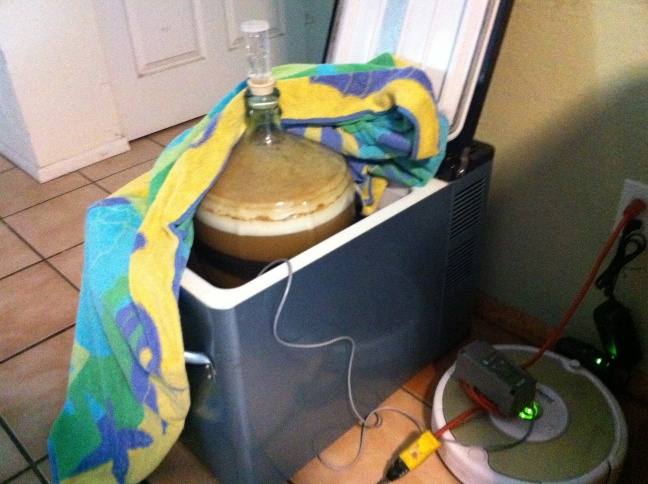 Re: First brewday with BCS

I did two wet runs before I brewed my first batch and I still managed to have problems that doubled my brew day.

I still shake my head at how I could have possibly missed some of the problems with my rig on those trial runs.